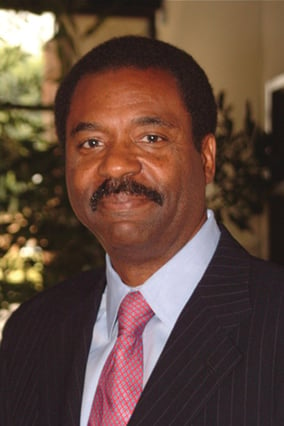 David L. Steward, founder and chairman of World Wide Technology was born in Chicago, Illinois, and moved with his family shortly thereafter to the small rural town of Clinton, Missouri.

After graduating from Central Missouri State University in 1973, Mr. Steward relocated to St. Louis, Missouri. He was the first person of color ever hired by Missouri Pacific Railroad Company to sell rail services. Upon leaving Missouri Pacific Railroad Company, he joined Federal Express as a senior account executive. During his tenure at FedEx, Mr. Steward was recognized as salesman of the year and was inducted into the company’s sales hall of fame in 1981.

After founding two successful startup companies, Mr. Steward founded World Wide Technology in 1990. Steward and his executive team have built what started as a small logistics/ transportation audit company into a leading systems integrator and supply chain solutions provider operating in over 4 million square feet of warehousing, distribution, and integration space in more than 20 facilities throughout the world. The company employs over 7,000 people globally and generates $13 billion annually in revenue.

Under Mr. Steward’s leadership, WWT has grown to be the most successful business in the history of the Government’s 8A disadvantaged business and small business program. The company has successfully partnered with the DOD, various security agencies, NIH, and many other civilian agencies.

Mr. Steward is a member of the Horatio Alger Association of Distinguished Americans and serves on their Board of Directors. He also serves on the Executive Committee of Greater St. Louis, Inc. and the boards of National Academy Foundation (NAF), United Way of Greater St. Louis, Concordance Academy, Washington University, Variety the Children’s Charity of St. Louis, Boy Scouts of America and many other organizations.

Mr. Steward has been married to his wife, Thelma, for 45 years and is involved in many philanthropic and community efforts. Their son, David L. Steward II, CEO of Polarity Ltd, is married to Mary and they have two sons, Trey and Julian. Their daughter, Kimberly Steward, is CEO of K Period Media.